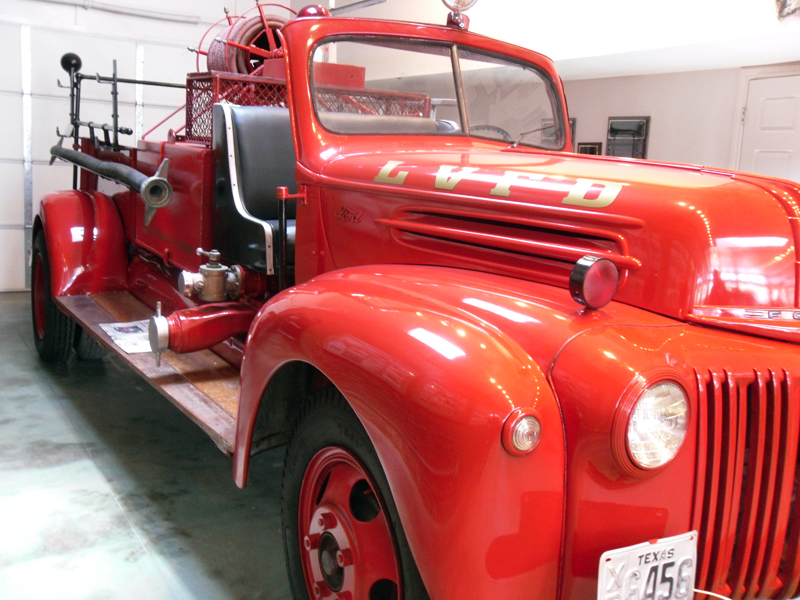 This restored 1942 Ford Fire Truck is on display in the museum on the town square.

Leonard, on U.S. Highway 69 and State Highway 78 in southwestern Fannin County, is near the center of a tract of land that, on February 8, 1845, Anson Jones, president of the Republic of Texas, granted to Martin Moore. This 3,520 acres, now known as the Martin Moore survey, was sold to Solomon Langdon Leonard in February 1859 for $10,560. It is located on the Blackland Prairie, which angles through southwest Fannin County from northwest to southeast. The prairie was bordered on the south by Wildcat Thicket and on the north by Bois d’Arc Thicket. Wildcat Thicket was an “area of trees, briar bushes, thorn vines, and tall grass, so thick and dense that it was almost impossible to see through it, even in the daytime.” It was also a haven for outlaws and fugitives and the scene of several killings in the Lee-Peacock feud (1865–72). 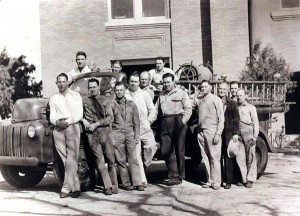 On July 22, 1880, the town of Leonard came into existence on the Leonard survey with the sale of town lots at auction. H. L. Parmele negotiated the location of the town with the Denison and Southeastern Railway. A post office and a school were established the next year. Residents numbered fifty in 1881. In 1885 the settlement had a population of 350, nine stores, three blacksmith shops, a church, a school, a gin, two hotels, two doctors, and two lawyers. Leonard incorporated on September 14, 1889, with a population of 400 people. The first four churches in town were the Baptist, Methodist, Presbyterian, and Church of Christ. The first city hall was located on the first floor of a two-story frame building in the town square. The Grove Hill Masonic Lodge occupied the second floor. Albert Ervin established the first newspaper, the Leonard Graphic, in 1890, and it is still in publication today.

On May 23, 1894, Leonard Collegiate Institute was organized. It began in a two-room frame building on Connett Street and in 1906 built a three-story building with the new name Dodson College. In 1908 the presbytery of the Paris Presbyterian Church took formal possession of the school and changed the name to Manton College Institute. The school closed in 1914. In the middle 1930s, Dr. J. J. Pendergrass established a hospital in Leonard, which was then the trading center of southwest Fannin County and adjoining areas in Hunt, Collin, and Grayson counties. The town was known for its outstanding cotton market. The principal crops were cotton, corn, and wheat. In 1989 the main crops were wheat and grain sorghum; ranching had replaced some of the farming. The population of Leonard slightly exceeded 1,000 for most of the twentieth century, then grew to 1,509 in 1980 and 1,744 in 1990. The population was 1,846 in 2000. The 2008 U.S. Census Bureau estimate was 2,085.